Sidney Sussex Chapel is unique among Oxbridge Colleges in having one of the finest collection of keyboard instruments, ranging in specialist repertoire from the late medieval period to the modern age.

One of the finest concert grands in Cambridge, this 1984 instrument, originally in Cardiff, was sourced by Martin Souter and fully restored by Shackell Pianos in Whitney, Oxfordshire, in 2010. 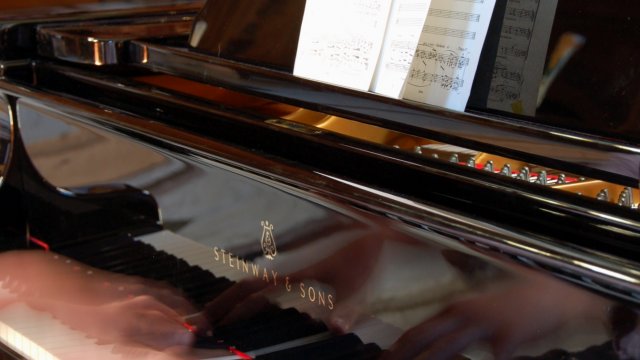 The big challenge in building this organ has been to create an instrument that would be tonally satisfying. A vocal sound that does not in the first place overwhelm, but embrace. A sound that would blend well with the human voice and at the same time would be able to play a wide range of musical literature. Another challenge was to make the organ look like it belongs in the chapel. The carvings and the other elements in the outward appearance of the organ were inspired by the beautiful existing decorations of the chapel. Taking the difficult situation the into consideration, this was not an easy task. The limitations have inspired us to be creative.

The decision was made to have the Great and the Pedal divided into two separate Cases, left and right of the console. The two windchests of the Great were positioned sideways with the lower pipes in the rear and the higher pipes towards the front. The space between the façade pipes was made larger than usual in order to allow the sound to come out of the case as free as possible. The Principal choruses 8, 4 and 2 are double in the treble in order to create tonal presence without having to force the pipes. In achieving a good balance between the Great and the Swell shutters were not only built in the front of the Swell division, but also on both sides. This was done to allow the sound of the Swell to be reflected into the chapel as much as possible.

The tonal concept has not been based on a historic example. However, the extensive experience that Flentrop Orgelbouw has obtained during the many restorations and reconstructions of historic instruments has been implemented in this organ. It was never the intention to build an English organ, but a new Flentrop organ with its own vocal character, especially designed for the musical practice in the chapel of Sidney Sussex College. We hope that this organ will touch the hearts of the listeners and that it may be a source of inspiration for musicians and singers in the years to come. 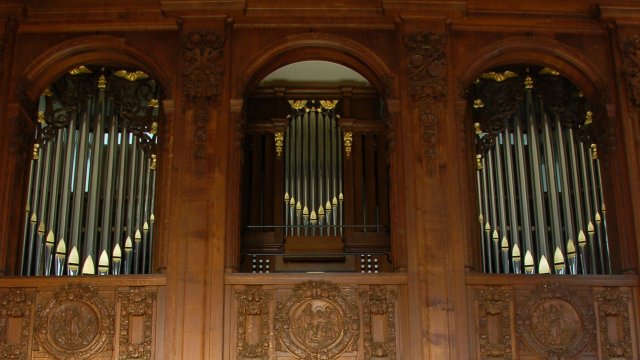 Temperament: “Norden” is based on a series of seven fifths narrowed by 1/5 th Pythagorean Comma. Those modified Meantone temperaments which are based on intervals using1/5th Syntonic Comma fifths are more common and can be tuned relatively easily by ear. However, unlike the intervals Norden, they do not generate thirds which beat at the same rate as the fifths. During the 1970’s a milder temperament related to Norden was introduced by Herbert Kellner. It has only five 1/5 Pythagorean Comma intervals and is held by many to be the most desirable temperament for the 18th century music of J. S. Bach, whose music explores all twelve keys.

Gilding and other decorations gifted by Professor Rosamond McKitterick 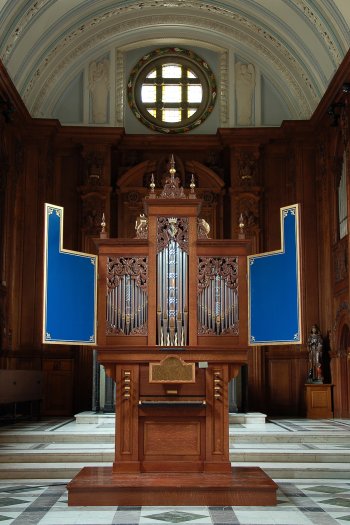 Other metal pipes of 28% tin, hammered

Case of solid White Oak, fumed in ammonia and stained.

Single wedge bellows and blower in base of the organ

Michael Mietke I (c.1656 - 1719) was a revered German harpsichord maker who apparently lived his entire life in Berlin where he was official maker to the court. His harpsichords must have made a strong impression on JS Bach who, in 1719 ordered a Mietke harpsichord for the court at Cöthen. This was probably the instrument for which Bach composed his Brandenburg concerto no.5 as a show-piece.

Three Mietke harpsichords survive: in Schloss Charlottenburg, Berlin, the ‘white harpsichord,’ with famous lacquer work by Dagly, belonged to Queen Sophie Charlotte and is a single manual, whilst the ‘black harpsichord’ is a double manual. As instruments destined for the court, both are unsigned and both have been altered in terms of compass and scaling. The third instrument, discovered only in the 1990s, and now in Hudiksvall, Sweden, is signed 'Berlin, 1710'. This somewhat plainer single manual instrument is musically unaltered and thus forms the model for the scaling and proportions of our own Mietke ‘Bach’ harpsichord. The stand though is not entirely original. We have therefore taken the liberty of creating our own stand, based on the three originals, which, we hope, truly captures both the sobriety and the exuberance of Bach’s German Baroque. 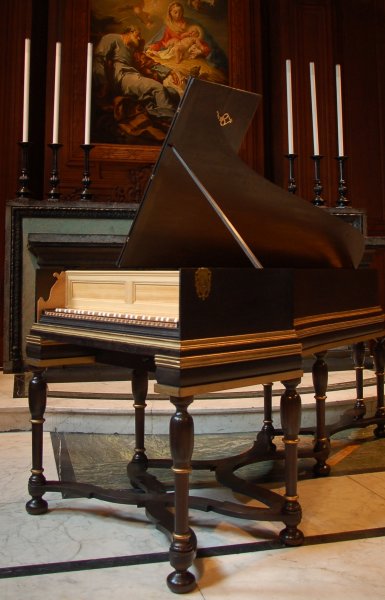 Registers: box guides (as on original) in fruitwood

Hinges and lock: copies of original in brass